An RFBee module is an unusual interpretation of the XBee module standard.
XBee is a popular long range radio module that allows for advanced "mesh" networks of such modules. XBee makes use of the powerful and advanced ZigBee networking standard. XBee modules come with a preprogrammed fixed set of AT commands that can be used for setting up
"remote controlled/distributed IO port nodes".
RFBee uses the same socket type and offers a pin layout conpatibility, but it uses a much simplified radio circuit with lower range, features and cost. An RFBee consists basically of the combination of a Texas Instruments CC1101 RF transceiver circuit, an ATmel AtMega168 IO processor, an Arduino bootloader and firmware that turns this into an autonomous processing module with radio communication capability. 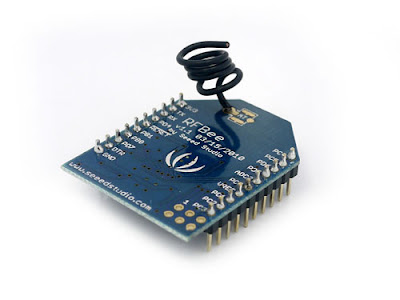 This module by default comes programmed with standard AT command repertoire as described here.
An exciting feature of the RFBee is that the firmware is open source and can be modified, expanded or replaced by your own implementation.
Such custom RFBees nodes can run bidirectional communication between each other and exchange whatever information and do whatever IO control operations needed. So this is hardware with considerable room for innovation in the firmware you flash on it. With the default firmware there is appr 40% space left in flash for adding your own extensions.
RFBee modules is flashed with new firmware from an Arduino IDE by connecting it to your computer using a Seeed Studio "UartSBee" module.

The versatile UartSBee board can serve three purposes:
1: With USB connected then a connected Bee module gets power from USB
and you can communicate with it and re-flash its firmware.
2: You can power it and communicate with a Bee module
using UART signals via connection pins of the board.
3: You can run a Bee module standalone using this module as a breakout board for access to all the pins of the Bee module and supply power via the provided power supply pins.

A convenient add-on companion hardware for the RFBee is the Seeed Studio "Relay Shield" board by Seeed Studio.

This board comes with four on-board relays and screw posts for installation. This board features a socket to accommodate a Seeed Studio "RF Bee" module