I clearly see Wifi becoming a very nice connectivity enabler for connected machines that simplify access to mobile applications. Recent smartphones can really quickly scan the environment for Wifi nodes and can thus quickly sense and connect to Wifi devices, either directly in ad-hoc mode or via a router. The trend of implementing command server logic directly in the connected IO controller device means very compact solutions can talk directly to a mobile phone if needed.
There exists already several examples of very compact IO controllers with on-board Wifi. This means a possibility for very conveniently hooking up equipment to either the public Internet or secure private networks. WPA2 encryption can in many cases offer a safe-enough secure transmission for many use cases. These units allow either ad-hoc connectivity between peers or to infrastructure routers.
For implementation of low cost equipment an attractive approach is to initially prototype solutions using development style IO controller boards and accessory function boards.
Many Machine-to-Mobile cases does not require extreme data transfer speeds or microsecond realtime responses and thus very low cost IO controllers can be employed that lend themselves well suited for a role in the integration chain between the physical gear and mobile user.
A very popular such small scale platform family is Arduino. This approach features a generic IO processor motherboard where any additional specific futures not catered for by this generic board is added as so called "shields" stacked on top via a standardized connector system. Thus the developer can quickly stack up the features needed and get up to speed with prototype realisation. The associated "Wiring"/"Processing" based SW library for C programming can be fully sufficient for lower frequency IO control tasks.
Many of the designs are open source both in SW and hardware and developers are free to convert a prototype into more cost effective production format.
This has also lead to a lot of "clone boards" produced by various sources that for example shrink areas required by basic Arduino processor functions by use of surface mount technology, then add additional attractive features on the same board that can avoid the need for any additional shield boards. The BlackWidow reviewed here is such an example where Wifi is added directly on the main board.
Once a prototype solution is established measures can then be taken in a project to rationalise/adapt the solution to a possibly mass production format by developing a custom PCB that accommodate the entire solution for the particular environment. This typically involves electrical I/O buffering, adapting for interference/temperature concerns and rationalising for cost. This is a complex undertaking including component sourcing, use of factory facilities and more that require volume to justify costs.
For small scale and one shot implementations these lab board systems can actually be employed as-is as part of a commercial solution provided that they are externally complemented with the electrical buffering/interference protection needed in a real physical installation.
Due to the cost of these Wifi enabled dev boards compared to "own PCB and sourced components in a mass production scenario" they are of course best employed as-is in low volume applications. But since they are open source a final solution is fair game for anyone to try to cost reduce using own PCB design and component sourcing/manufacture. A reason for own PCB is of course also to accomplish an acceptable equipment integration in terms of quality and production efficiency.
Now to the point of this review; one "Arduino-on-steroids" example I evaluated the other week is the Blackwidow 1.0 card which is a Wifi enabled Arduino clone. 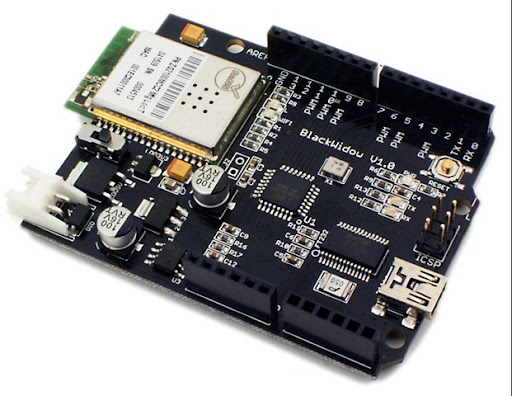 As mentioned Arduino is a nice platform standard for quickly being able to realise and program IO controller solutions where there is not specific high speed data transfer requirements.
In this case using existing public domain Wifi stack SW I was able to have the Blackwidow connect to my WPA2 router within some 30 minutes of tinkering after my first time encounter with it. This is typical for these open source tools; others went before you and their results are available for you as a basis for being able to take things further into specific solutions. To stand on the shoulder of giants instead of reinventing that wheel all over can be key.
2012 update: Asynclabs who manufactured and sold the Black Widow later ceased operations.
Upplagd av gunnar-mobimation kl. 1:03 PM